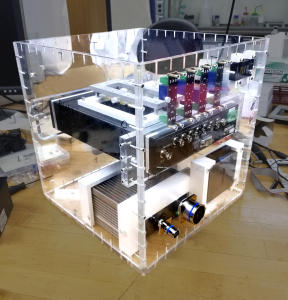 Studying Microparticles on the ISS

The International Space Station (ISS) is a unique test bed for research.

One project that will benefit from the ISS microgravity is being developed by a team including Dr. Stuart Williams, Associate Professor at the JB Speed School of Engineering at the University of Louisville. The team will be studying methods to hold microparticles in suspension—and LabSmith uProcess microfluidic components and Synchronized Video Microscopes will be critical parts of the experiment.

Microparticles that lack a significant zeta potential tend to agglomerate or crystallize. However, studies have shown that charged nanoparticles can act as a barrier to repel microparticles that have negligible charge. The challenge is that this weak interaction is difficult to study in normal gravity as the microparticles tend to drop out of suspension too quickly to study.

The challenges of experimenting on the ISS

The ISS offers a unique opportunity to study colloids because, in microgravity, the particles stay suspended much longer. Even though the nanoparticles are too small to see under a microscope, the microparticles can be maintained in suspension and viewed, and thus the interaction can be inferred.

The ISS, however, presents an array of challenges. Any experiment must adhere to tight space and power constraints, and it must be able to operate with an intermittent Internet connection. Astronaut time is extremely valuable, so researchers typically cannot require more of an astronaut than to install the experiment, or to simply turn it on.

LabSmith uProcess components are enabling Williams’ team to develop an experiment that meets these diverse requirements. The experiment will include multiple LabSmith syringe pumps and automated valves, and the SVM Inverted Fluorescence microscope. Williams says the components are extremely compact and draw little power. It is possible to operate all aspects of experimentation from the ground because the devices are controlled from a robust, common platform. “Imagine us trying to build something, integrate with external equipment, and, by the way, automate and control it all as well,” said Williams. “The uProcess system takes care of the engineering design aspect and lets us focus on the science.”

During the project, the ground team will initiate programs to control fluid flow and manipulate the electric fields. Each routine must be able to start and stop on its own because the data connection is frequently lost as the ISS circles the earth. Redundant syringe pumps and valves will be included to provide high reliability, even within the confined space constraints.

Through this experiment, the team hopes to develop empirical data to better describe the interaction of the charged nanoparticles with microparticles. They also hope that, by manipulating the electric field, they may be able to control to an extent how the particles assemble.

Research such as that of Dr. Williams and his team will pave the way for future studies in a range of fields. LabSmith is proud to help make their space-based research a reality.

This project is funded by NASA EPSCoR.

Refresh the page after logging in.

Create an account with us and you’ll be able to: