LabSmith's products are made by researchers, for researchers. We know the value of having just the right tools in the lab, letting you focus on science. 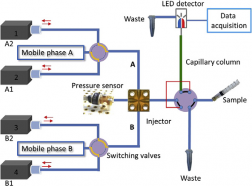 Trends towards portable analytical instrumentation of the last decades have not been equally reflected in developments of portable liquid chromatography (LC) instrumentation for rapid on-site measurements. A miniaturised medium pressure capillary LC (MPLC) system with gradient elution capability has been designed based on a flexible modular microfluidic system using primarily off-the-shelf low cost components to ensure wide accessibility to other analysts. The microfluidic platform was assembled on a breadboard and contained microsyringe pumps and switch valves, complemented with an injection valve and on-capillary detectors, all controlled by a PC. Four miniaturised microsyringe pumps, with 5, 20 and 100 μL syringe volume options, formed the basis of the pumping system. Two pairs of pumps were used for each mobile phase to create gradient elution capability. The two microsyringe pumps in each pairs were linked by two electrically operated microfluidic switching valves and both pairs of pumps were connected through a zero void volume cross-connector, thus providing a low hold-up volume for gradient formation. Sample was injected by a 20 nL nano-LC sampling valve, directly connected to a 18 cm long 100 μm i.d. Chromolith CapRod RP-18 monolithic capillary column. On-capillary LED-based UV–vis photometric detection was conducted through a piece of equal diameter fused silica capillary connected after the column. The performance of the portable LC system was evaluated theoretically and experimentally, including the maximum operating pressure, gradient mixing performance, and the performance of the detectors. The 5 μL microsyringe pump offered the best performance, with typical maximum operating pressures up to 11.4 ± 0.4 MPa (water) and gradient pumping repeatability of between 4 and 9% for gradients between 0.10% s−1 and 0.33% s−1. Test analytes of charged and uncharged dyes and pharmaceuticals of varying hydrophobicity showed typical RSD values of 0.7–1.4% and 3.3–4.8% in isocratic mode and 1.2–4.6% and 3.2–6.4% in gradient mode, respectively for retention time and peak area repeatability.